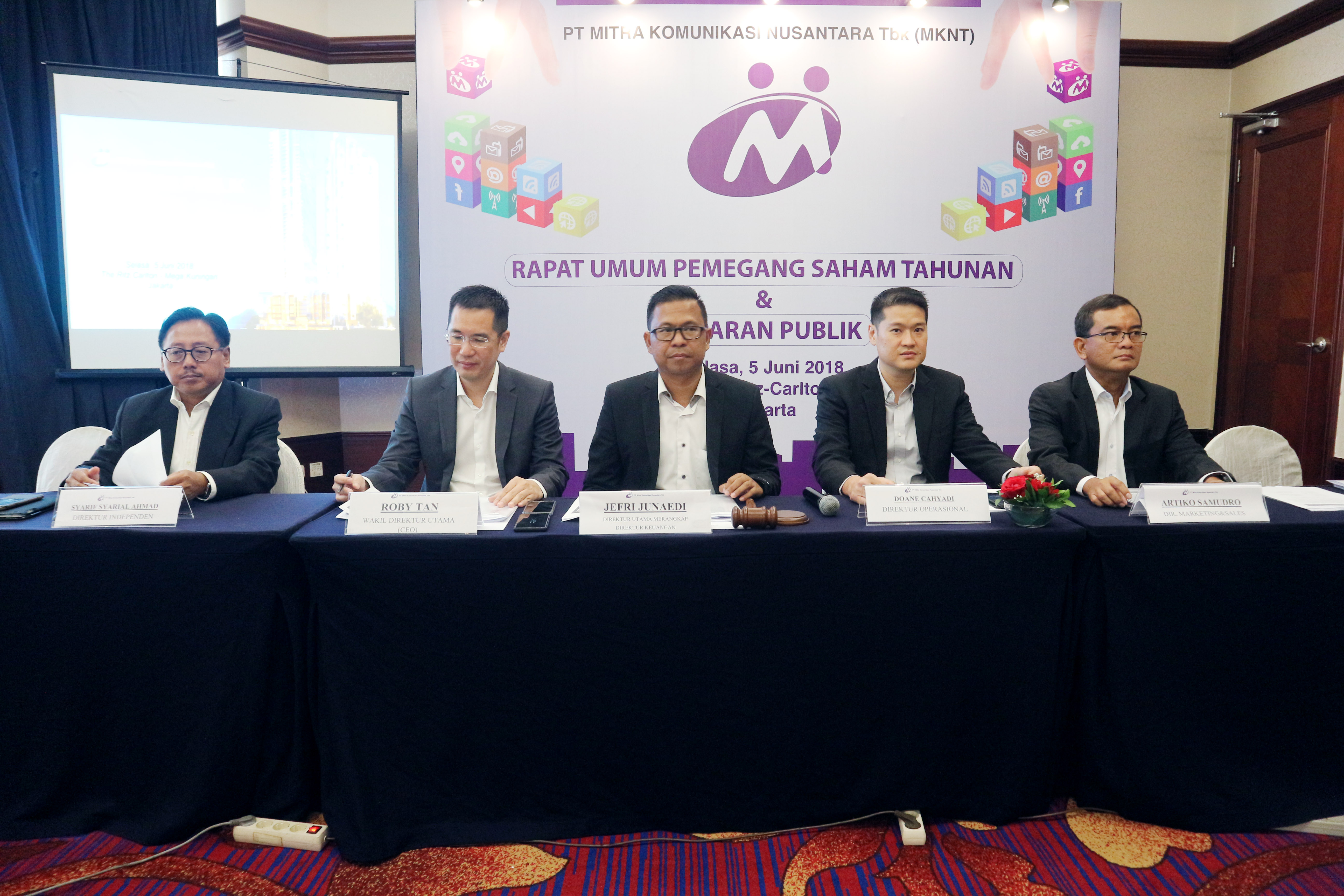 Results of the Annual General Meeting of Shareholders 5 June 2018 PT Mitra Komunikasi Nusantara Tbk
Jakarta, June 6 2018 - PT Mitra Komunikasi Nusantara Tbk has held an Annual General Meeting of Shareholders (RUPST) on June 5, 2018 at the Ritz Carlton Hotel. The RUPST has met the quorum because it was attended by shareholders representing 3,272,839,200 shares or 65,46% of all shares with valid voting rights issued by the Company, in accordance with the Articles of Association of the Company.
RUPST Results:
1. First Meeting Agenda:
With the receipt of the annual report of the Board of Directors and the approval of the Company's financial statements consisting of the Balance Sheet and profit and loss calculation for the 2017 financial year, it is also proposed to be able to provide full repayment and acquittal (acquit et de charge) to all members of the Board of Directors and Commissioners for actions and the supervision they have carried out during 2017, insofar as these actions are reflected in the financial statements, except for acts of fraud, embezzlement, or other criminal acts.
2. Second Meeting Agenda:
Approve the determination of the use of net income in 2017 as follows:
As much as Rp.500,000,000 from net income for the 2017 financial year is stipulated as Mandatory Reserves to fulfill the provisions of Article 70 of Law No. 40 of 2007 concerning Limited Liability Companies.
The remainder of net income for the 2017 financial year will be recorded as retained earnings (Retained Eearning) to support the development of the Company in 2018. Therefore the Company does not distribute Dividends for the 2017 financial year.
3. Third Meeting Agenda:
Approved the appointment of the MARIA LECKZINSKA Public Accountant from the MIRAWATI SENSI IDRIS Public Accountant Office (MOORE STEPHENS) to audit the Company's financial statements for the 2018 financial year and authorize the Company to determine the honorarium of the Public Accountant or other Public Accountant offices and other terms of appointment.
4. Fourth Agenda of the Meeting:
Approve and authorize the Board of Commissioners to determine the honorarium and other allowances for the Board of Commissioners and Board of Directors for the fiscal year 2018, and give authority to the Board to carry out duties as the company's nomination and remuneration committee to set the remuneration of the members of the Board of Commissioners.
5. Fifth Meeting Agenda:
Approved changes in the composition of the Company's management, namely:
a) To accept the resignation of host VICTOR ANTONIO KOHAR from his post as Commissioner, Mr. ADE AMBRITA from his position as Independent Commissioner since April 25 2018, Further liberation and discharge until the period of January 1, 2018 s / d 25 April 2018 after the Company's Financial Statements obtain approval from the General Meeting of Shareholders.
b) To elect the host REDI SOPYADI as Commissioner, Mr. Doane Cahyadi as Director of Operations of the Company, Mr. ARTIKO Samudro as Sales and Marketing Director of the Company, Mr. SANTOSO WIDJOJO as President Commissioner and Independent Commissioner, Mr IVAN EKANCONO as Commissioner, and Lifting host ROBY TAN as Deputy President Director (CEO) as of the closing of the Meeting with tenure in accordance with the Articles of Association of the Company. So that the composition of the Company's Management is as follows: 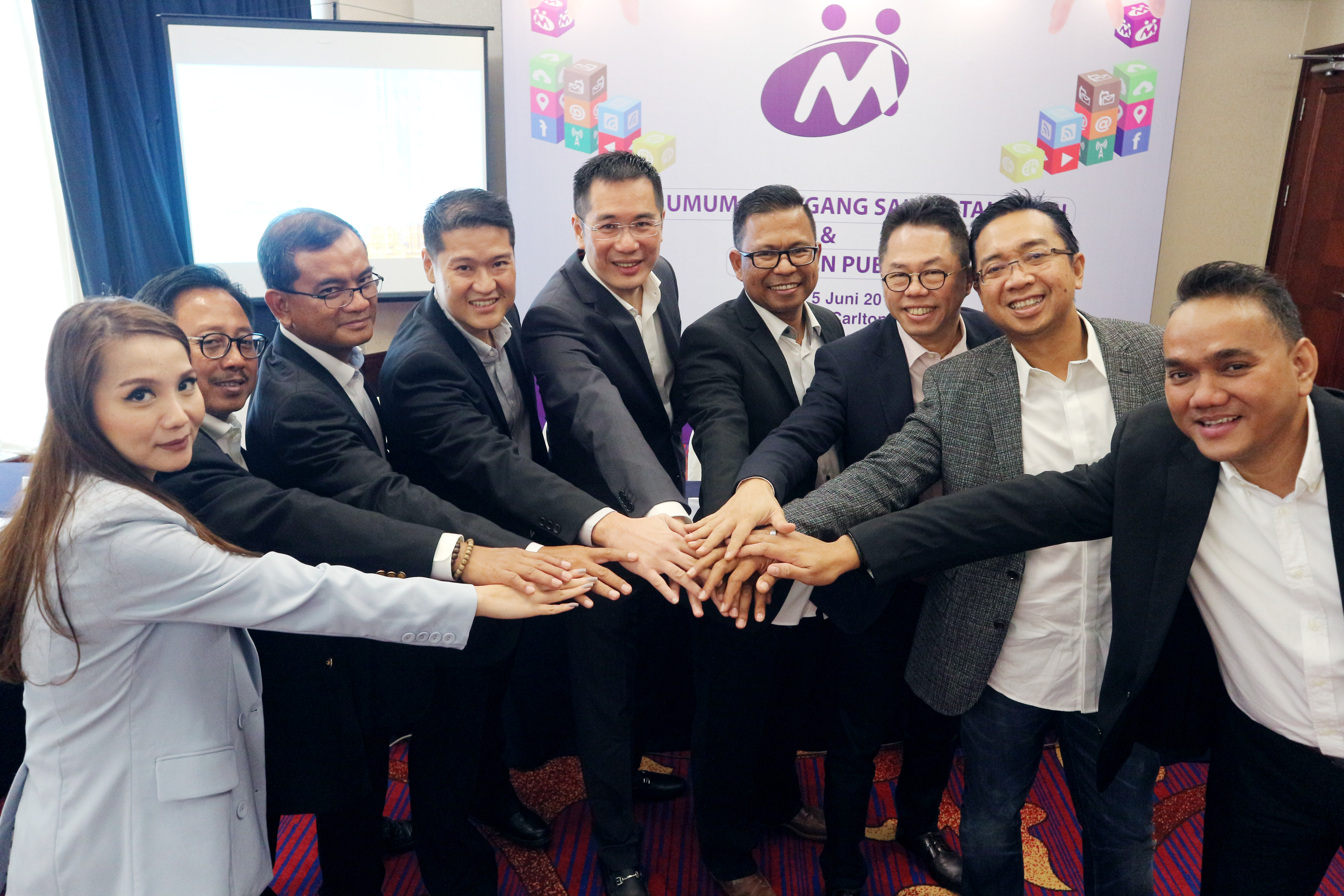